Just to let you all know we have started a new blog with some of the guys from Wellington.

Will cover Impetvs and I suspect every other game you can think of, but not GW.... never GW :)

So finally, after a lot of back and forth with my angry horsemen arrived * and rather than me talking about the army, I thought in this post that I would review the boxes that have arrived so far.

Great Things
First off, these figures are amazing. The crisp detail, minimal mould lines and plethora of options mean that I'm really, really going to enjoy assembling this army. The knight sprues come with some great options for weapons - lances sure, but swords, maces, morning stars and axes. There are bits for making musicians and standards and a wide variety of the famous Teutonic helmets. 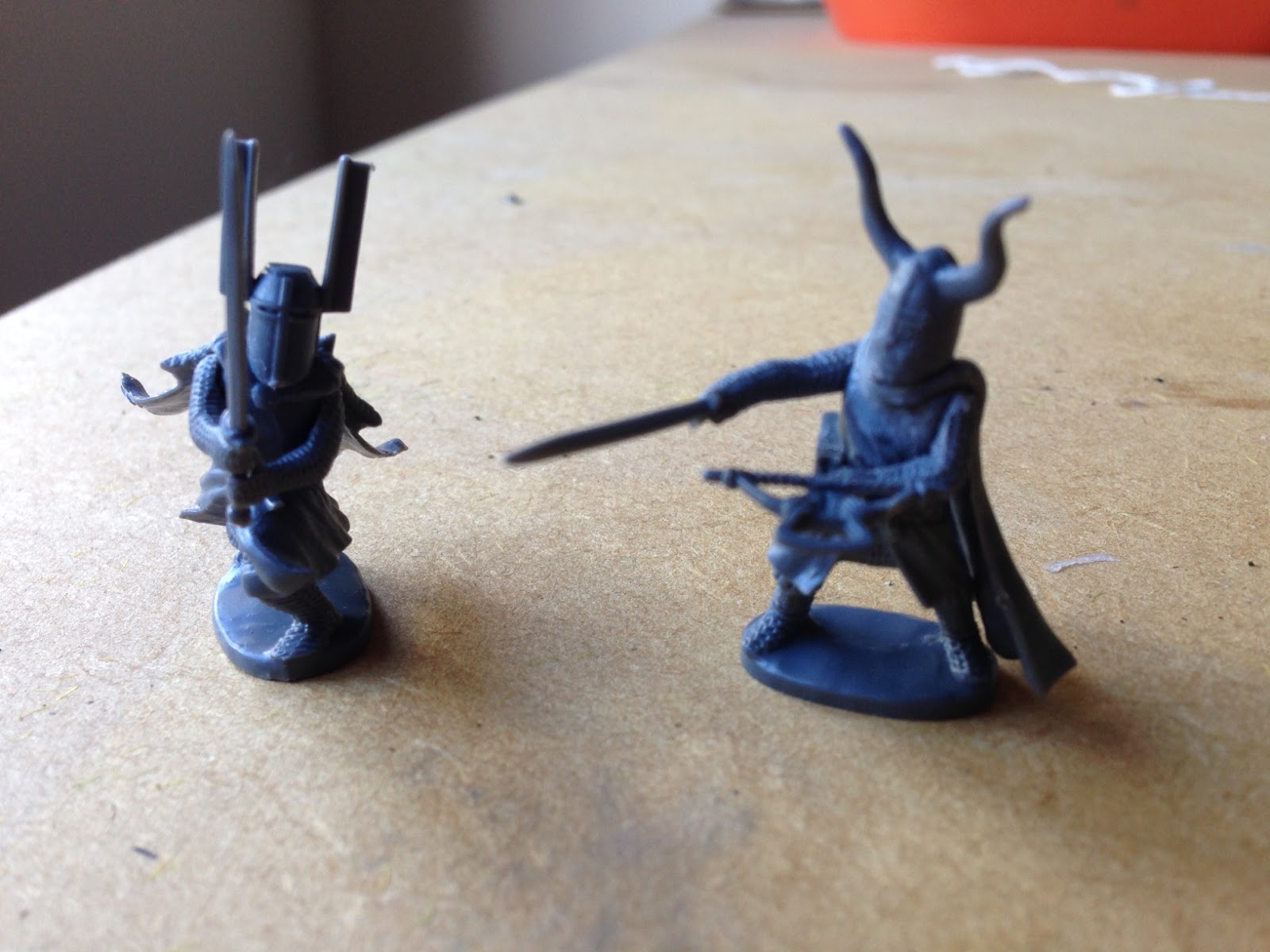 The foot box is even more clever in the many and numerous ways it can be assembled. I have more than enough parts to make entire bases of dismounted Teutonic foot or a mix of close-order Order foot and Order crossbowmen. This one box of 24 figures will make three 8 man bases - two bases of 2 knights and 6 close-order Order foot and a base of 2 knights (including the sweet dude on the right above) and 6 Order crossbow. 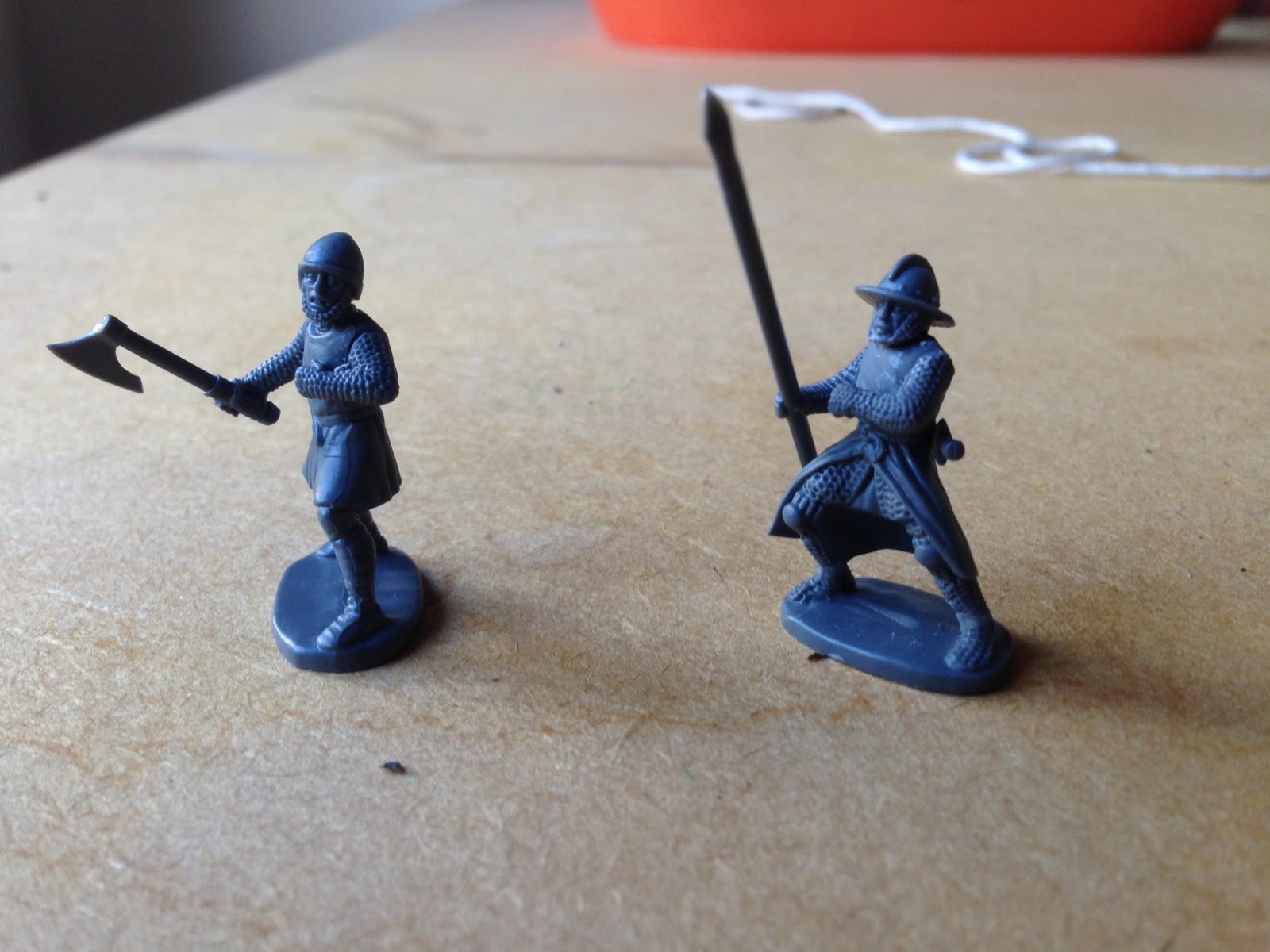 Not So Great Things
To be fair, at this stage of the proceedings I have a single complaint about these box sets and it's not a huge one. The horses do not go together as smoothly as the foot and a bit of green stuffing will be required on the seam of the two parts. On the plus side, it's not serious and I think will largely be resolved by using my last pot of GW liquid green stuff. Hopefully I have enough to get through the nearly 5 dozen horses that this army requires. :) 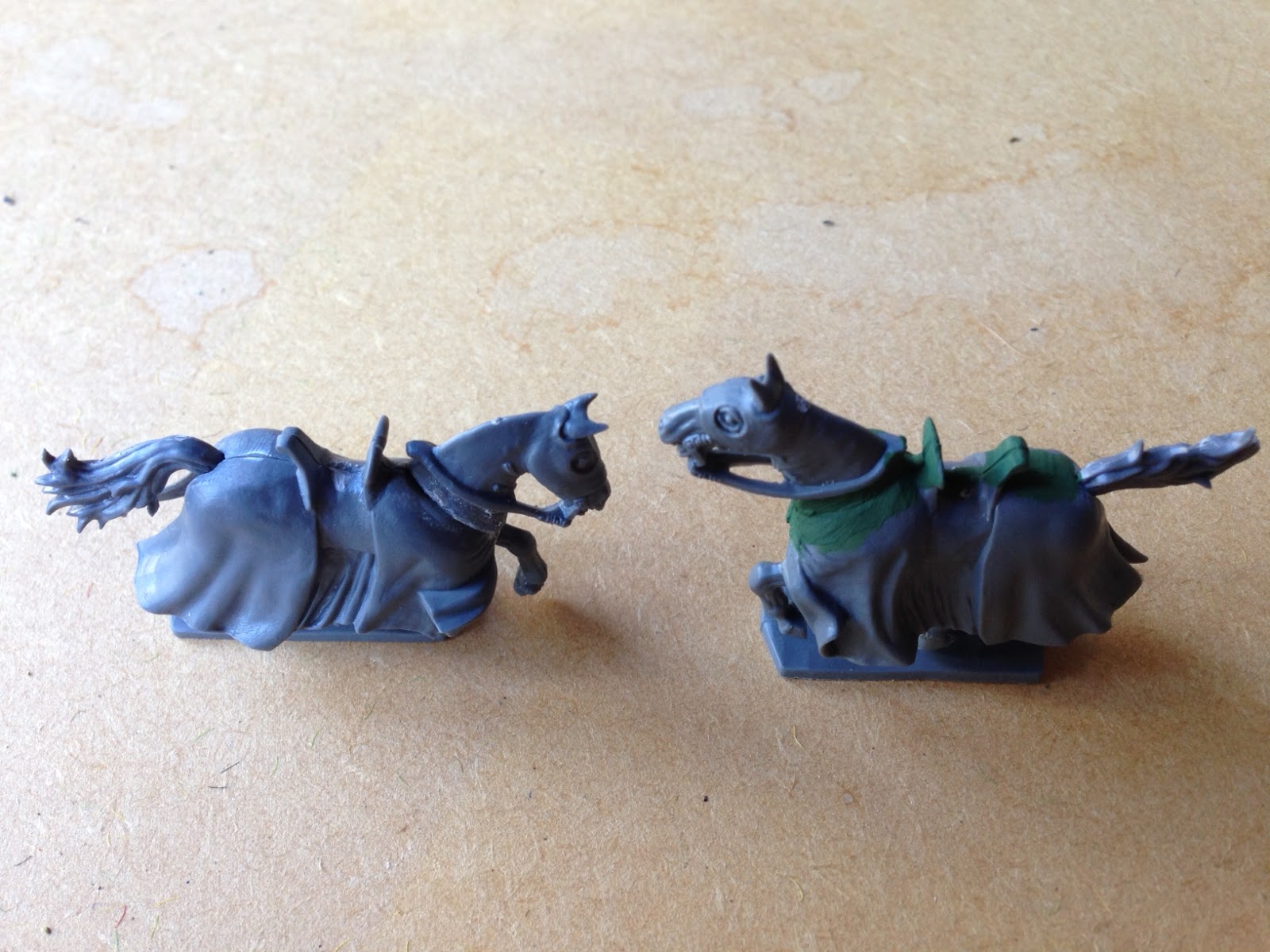 Overall
Stoked. These kits allow me to deal with my issues with so many manufacturers where, eventually, you have to repeat models. There are more variations (I didn't do the maths. It's a lot) in each box that I should never have to actually put the same model on a base anywhere and I cannot adequately describe how happy that makes me.

I am glad I decided that I could actually bring myself to make this army work and so help me, I am going to make it work. By the time I'm done, I'm going to be the best gosh darn painter of blended whites that ever existed. Ok, maybe not. But I'm pretty sure I'm going to be crazy good at it.

* I should say more as I think it warrants a mention. The supplier took a bunch of stuff off the order and gave me credit on it in order to get it shipped. So I ordered the next 2 boxes of non-Teutonic horse (for my Knechte and Turkopolen) as well as some character figures to finish up a warband for Ronin. The Ronin figures meant that the shipping would be delayed until the 16th of May. They emailed that the box had shipped on the 17th. Can't argue with that kind of service eh?
Posted by McZermof at 19:53 3 comments:

Spartans with some paint

The painting project has begun, with Tim, Alex and I all painting up our Impetus Army. Alex's has finally arrived (which he can fill you in on) and Tim is fighting it out with LBMS shield transfers (they don't get along it seems).

As for me? Well I have been painting. Here is a close up of one of my first Spartans 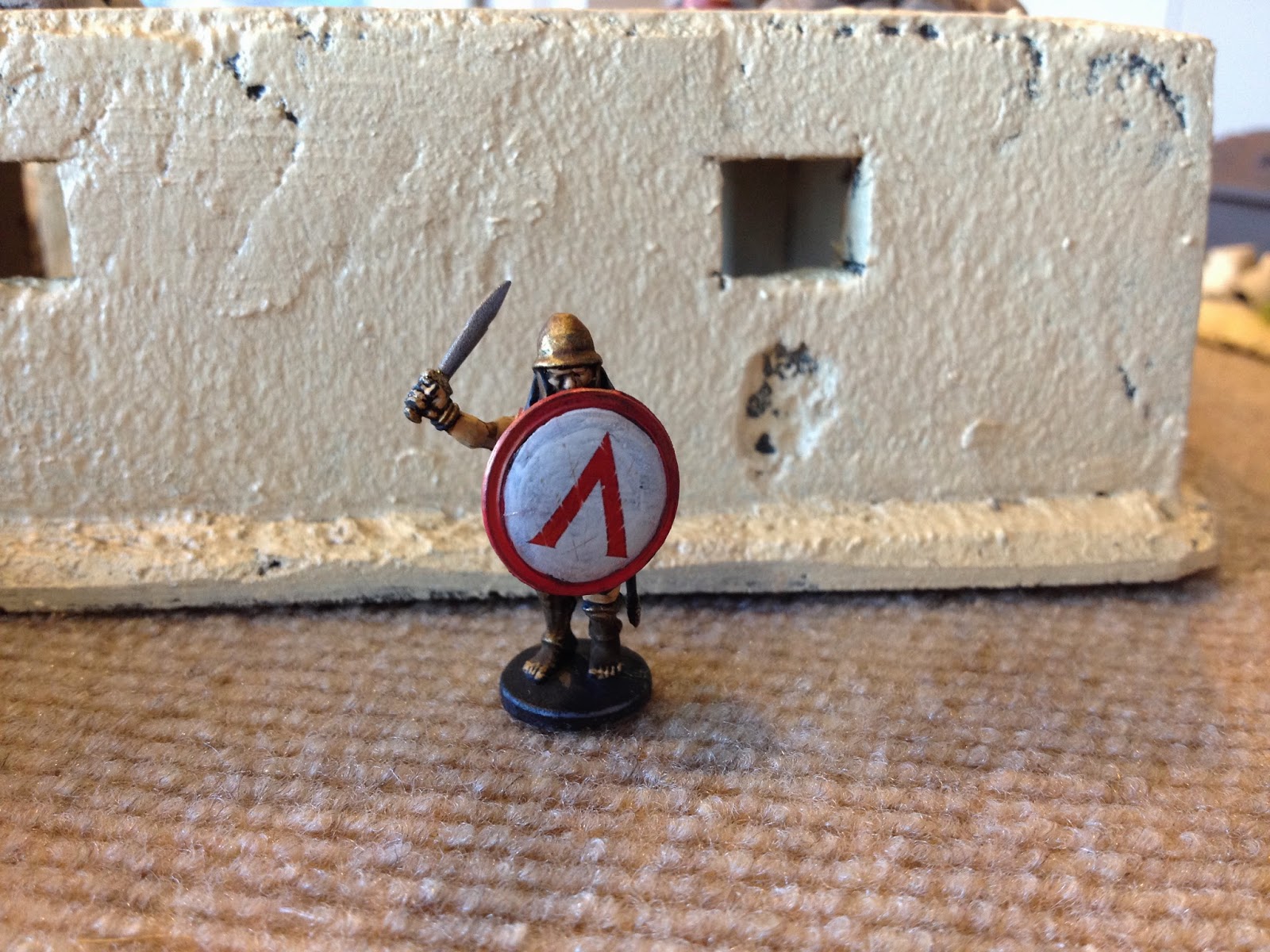 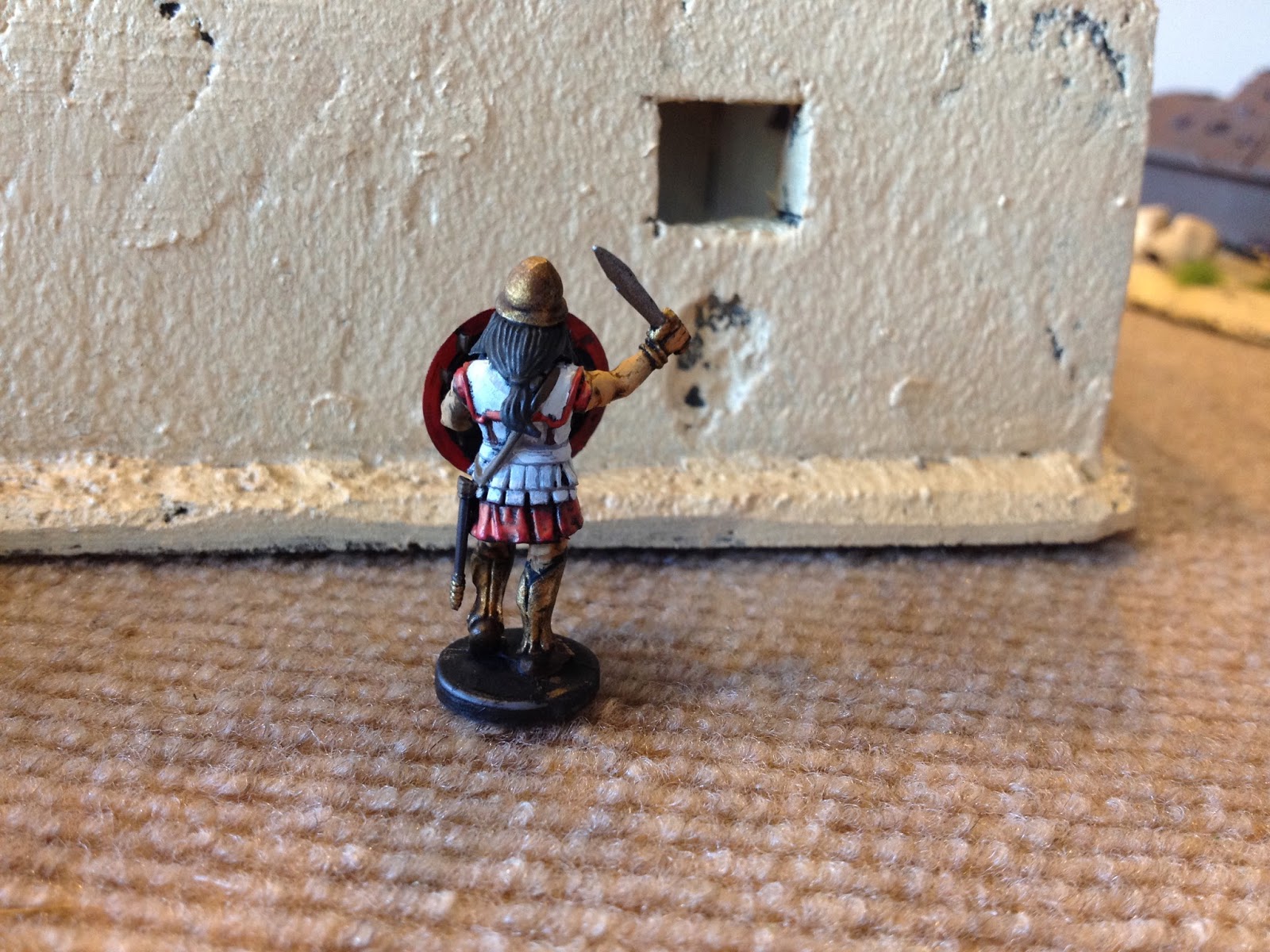 The photo is not all that great, but it does give you a good idea for how they will look! Not the greatest painted Spartans in the world, but they will do the business all ranked up.

Speaking of ranked up, this is where my first Large Unit is at... 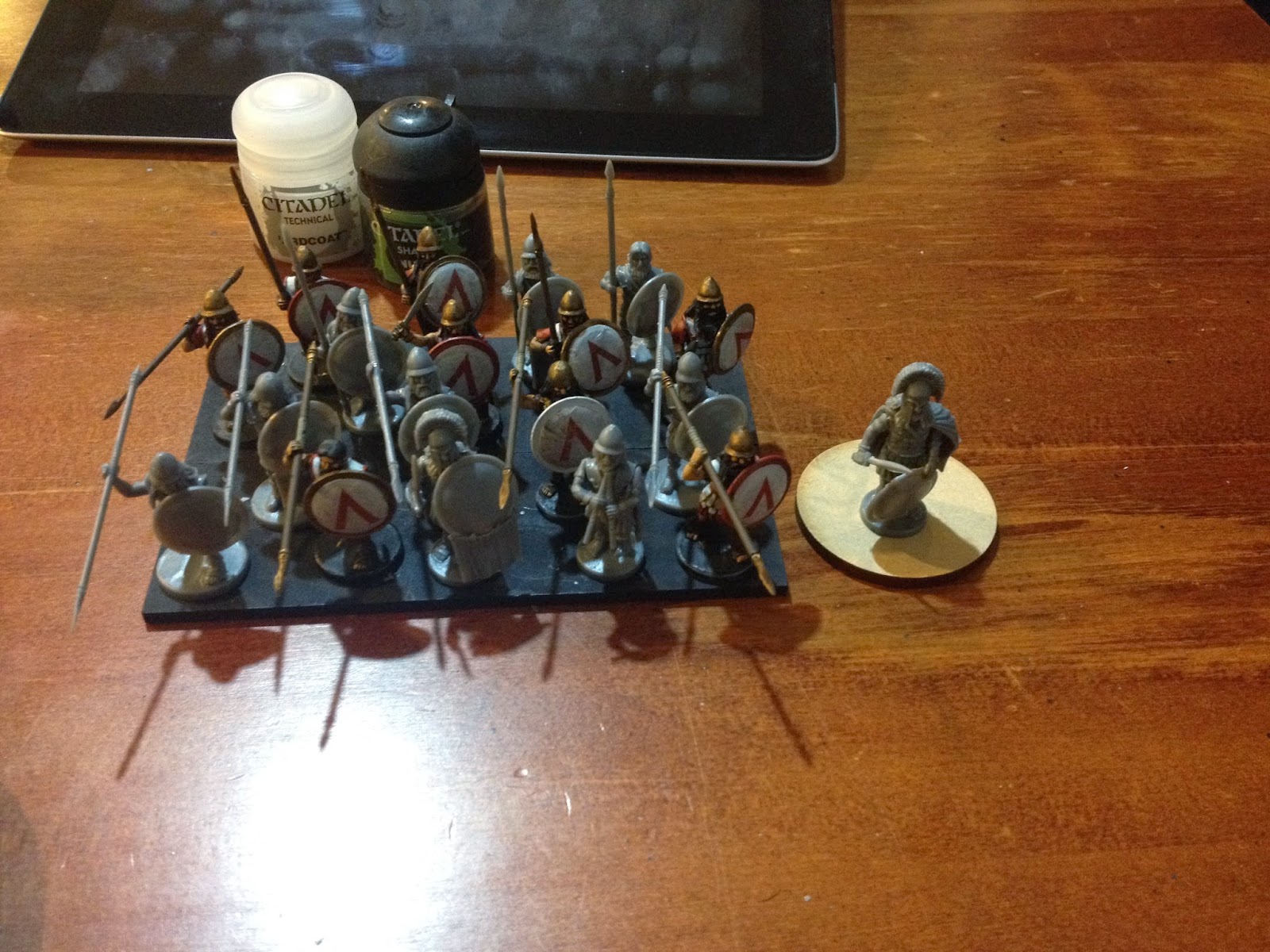 There are 9 painted, with 9 more to go. I have undercoated the rest, and painting has started. Hoping to get the whole lot done by the end of the week, then I can start the next unit!

Race you to a Basic Impetus army Tim!

A response to the Athenian posturing...

So, the Athenians have been posting army lists, and have already begun to form their armies.

In light of such aggresive actions, the only possible response for Sparta is to respond in kind.

While it might not be in as fancy a table as those Athenians, it tells you all you need to know (in spartan style!). I have some thoughts about using lost of small units of the Disc A Spartans, but I am thinking that this is a good starting point for the army.

And as for starting to build an army, the first Spartans are on the painting table!

While I wait for my shiny new plastic angry men on horses to be dispatched from the UK I have instead taken some time out of my ludicrously busy schedule to rebase two of my old Field of Glory 15mm armies for Impetus. Why you ask? Well, I don't play FoG anymore and am unlikely to ever go back to it. My views on it are a subject for another day. 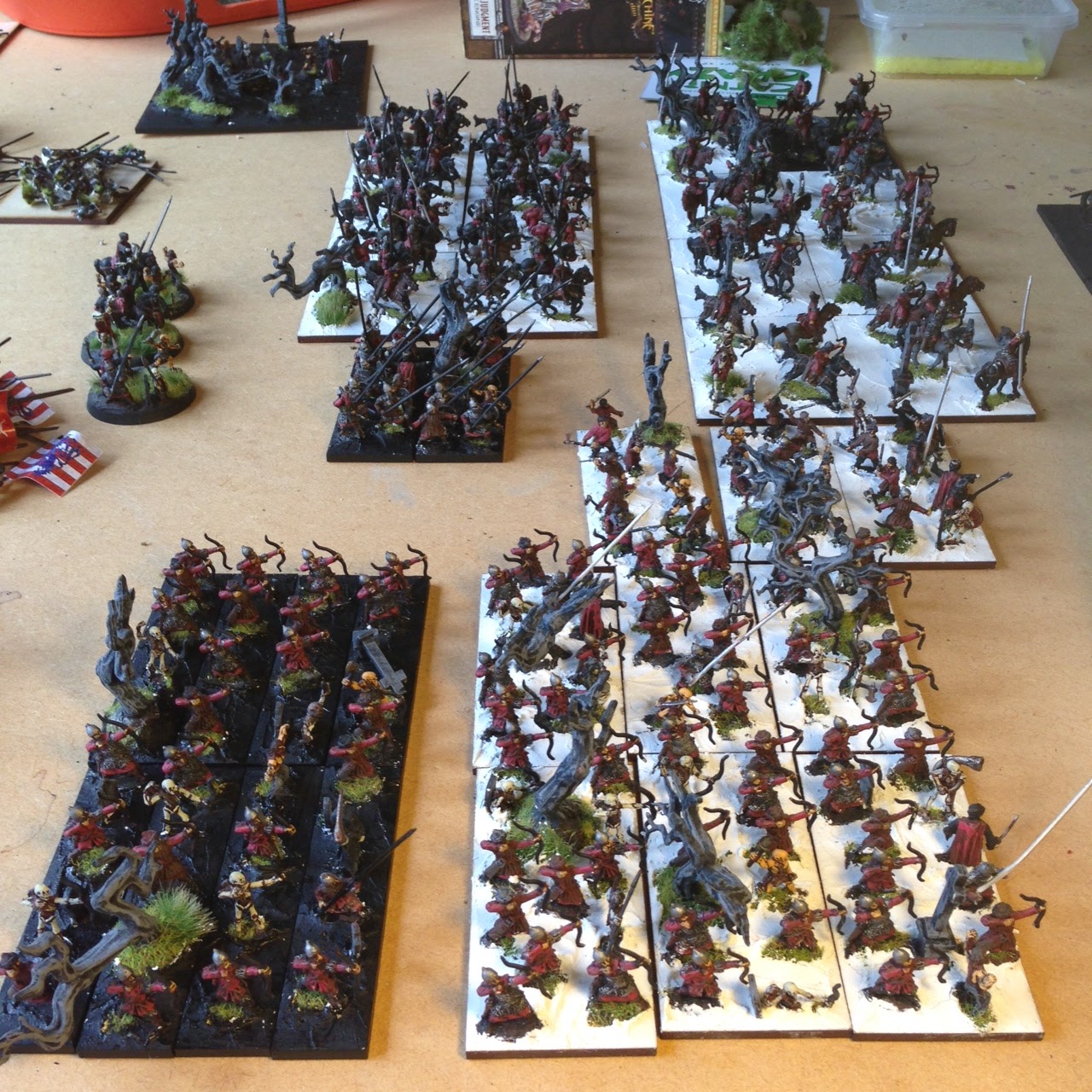 So I present to you the Work in Progress photos of these two projects - both armies close to my heart. The first, Wallachians, featuring vampires, wraiths, skeletons, werewolves and zombies, is all about not taking history too serious. 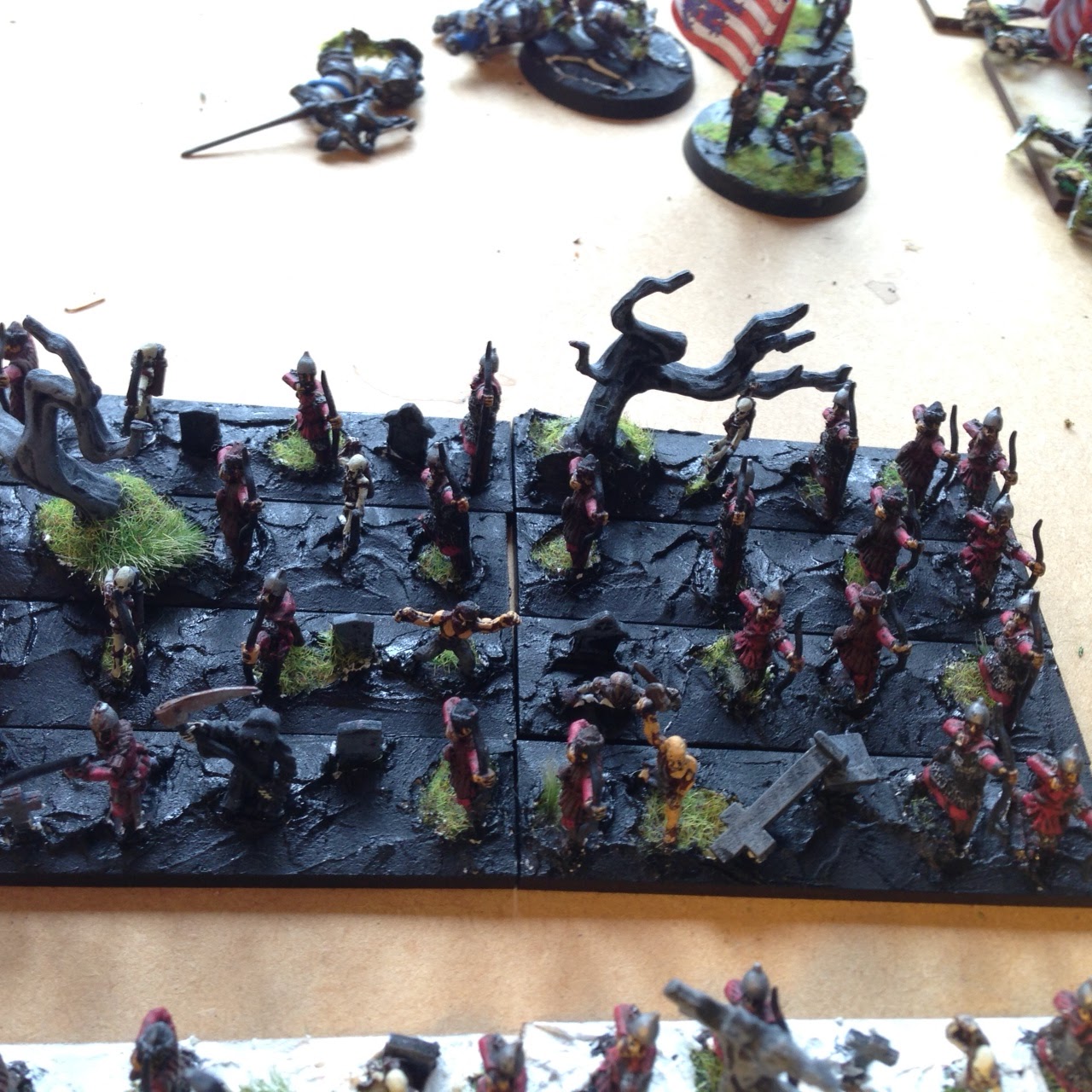 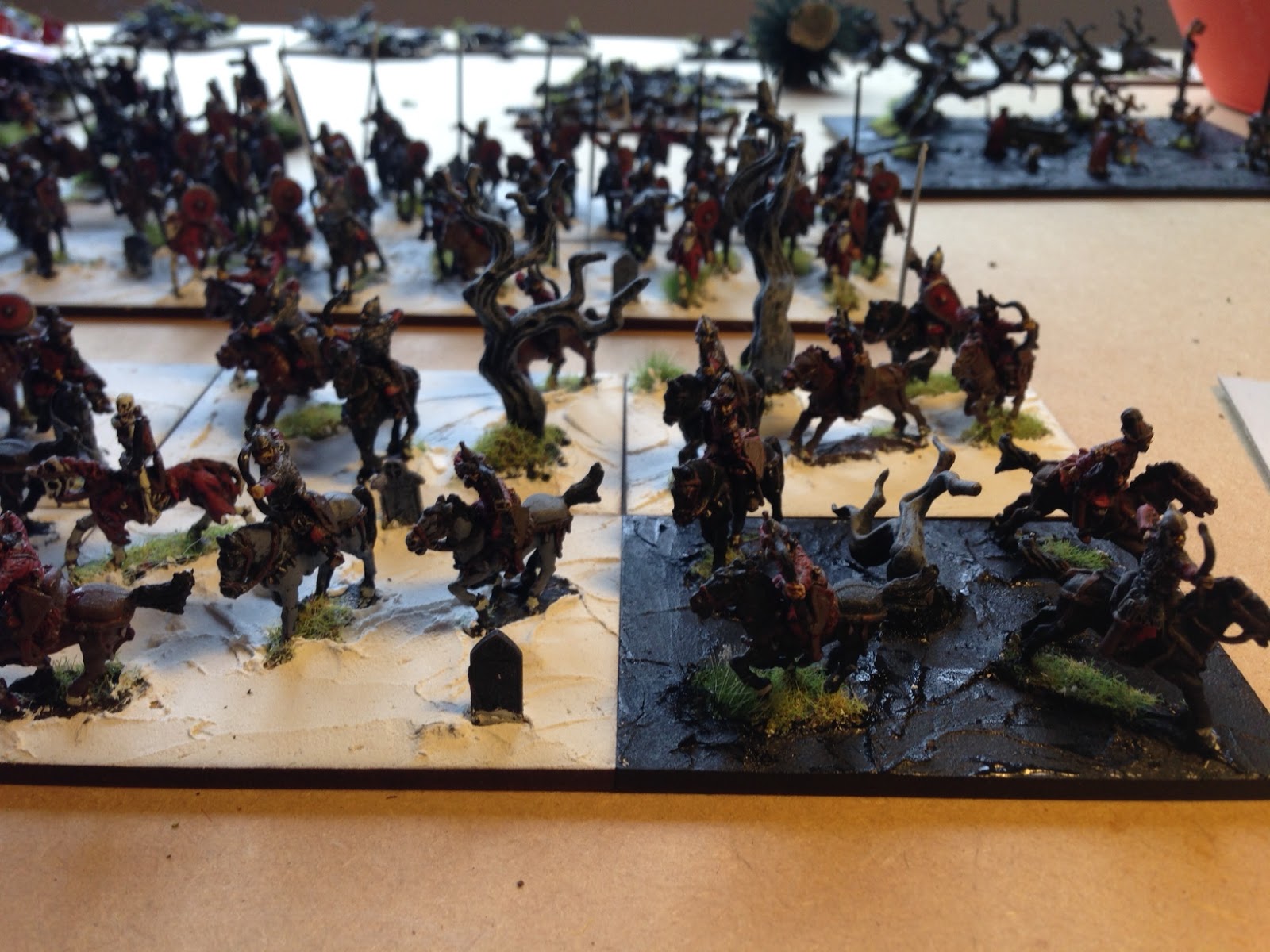 The second is one of the most popular armies for ancients gamers - Burgundian Ordonnance. An army designed by it's creator to take the best of military science of it's day has possibly the worst win/loss record (and a pretty poor Goal Diff as well) of any army in the medieval era. 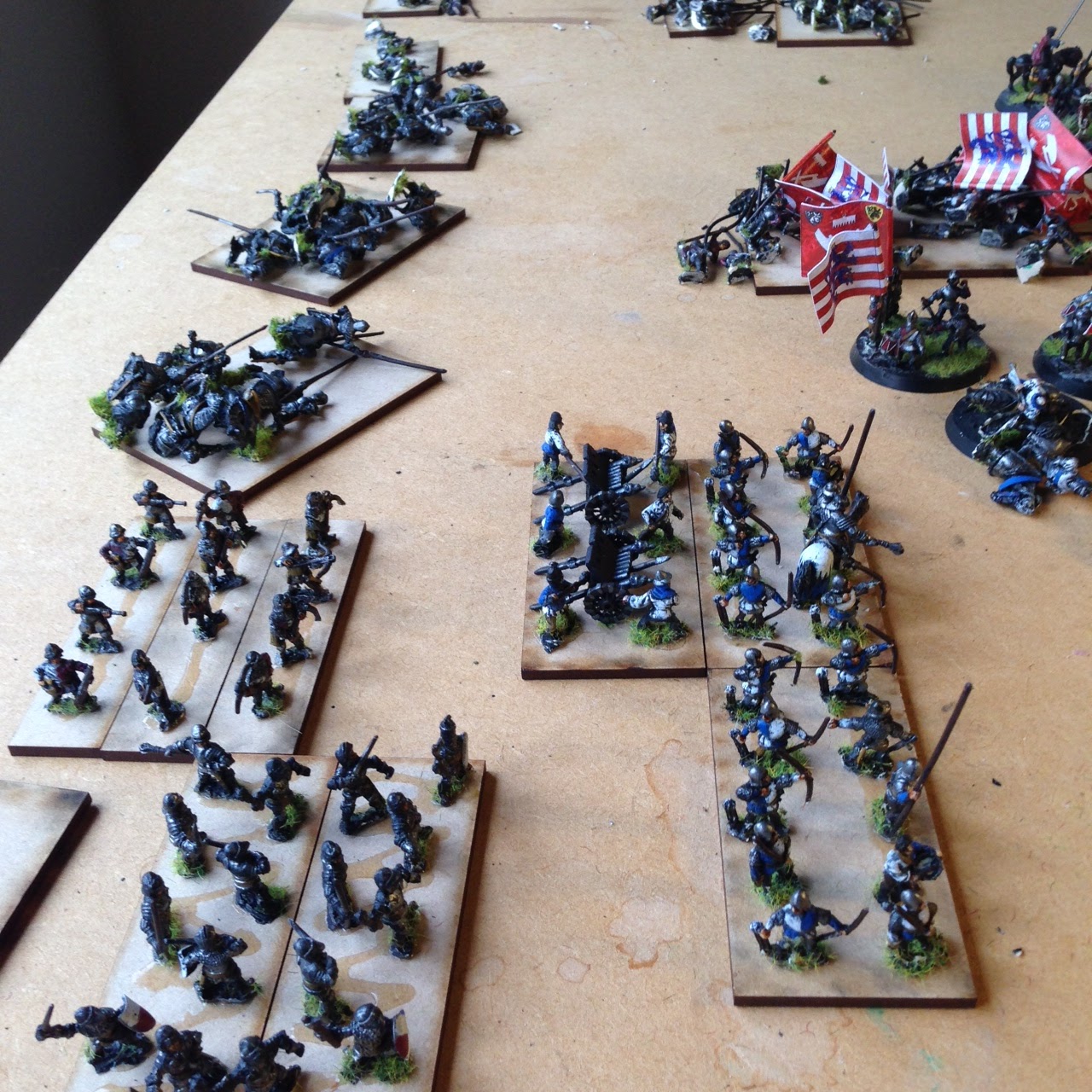 The Burgundians have a ways to go - I'm missing a few bits from the previous FoG armies that made it up and may have to *gasp* actually pick up a few new bits and bobs. This will be novel indeed.

There's one more that I'll take some piccies of when I've done some necessary repair work. My Basic Impetus Aztec army I put together with some figures I bought to try out the Black Hat Aztecs before making a full FoG army. So that never happened and by good luck more than good management, I made up a really nice variety of bases for Basic Impetus. It's not an army I'm ever likely to expand for big boys Impetus though - it works really well in Basic and, honestly, I don't think I'd want to paint that many dudes again either!
Posted by McZermof at 16:29 1 comment:

So this is the list am I aiming towards.

Nothing too fancy but should be fun to play.

Once the group here is fully up to speed with the rules, I will spend the last point as an exploration point.

Now to get back to the painting table / floor :)

So time for me to start another army… I have a sickness that requires me to buy miniatures.

Or at least that is how it feels sometimes. :)

So Pooch conned me into a Greek army and I thought Athenians would be a nice colourful option, even though we lost the war, at least there is still an Athens.

McZermof should have some great looking angry men on very angry horses to run over our troops as well. (If they ever arrive in New Zealand.)

Pooch handed me a plastic bag at work on Monday filled with Victrix Plastic Greeks and some Little Big Man Transfers; if only it was filled with cash.


So after an evening of assembling figures I had a go at a test figure, below it the result. He is quite shy so you can see more of him once he has some friends.


The plan is to finish the first stand by Sunday, which will mean only another seven to go :)